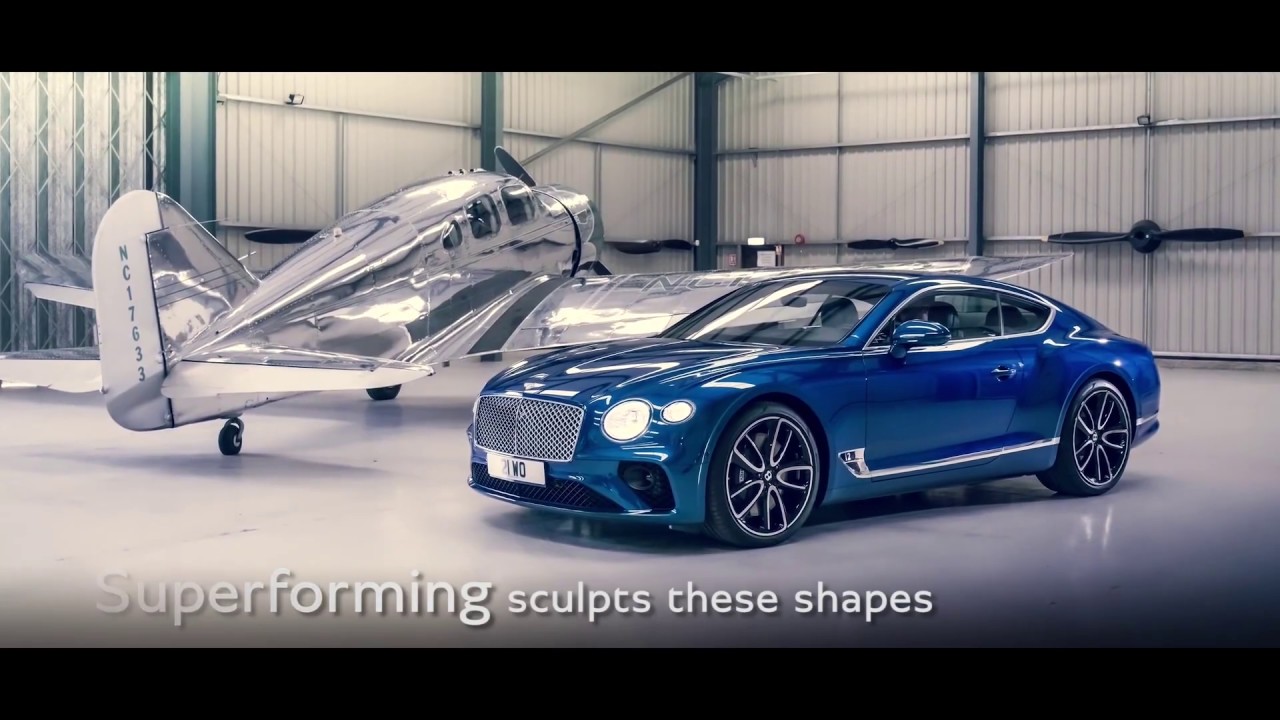 The exterior design of the new Continental GT is based on a bold new vision that is unmistakably Bentley. The all-new body and materials save more than 80 kg over the previous Continental W12 body.

While the Continental GT retains the classic elegance that made its forebear so popular, the form of the new car is more sculptural and sharply defined and takes much of its inspiration from the critically acclaimed EXP 10 Speed 6 concept car.

To allow for such a bold reimagining of the Continental GT, the aluminium skin has been crafted using Super Formed technology – a precision technique working with aluminium heated to 500°C which has previously been used on Bentley fenders. This method allows designers to invoke more complex, sharply defined body lines and a deeper, sculpted haunch muscle.

The Continental GT is the first production car ever to have an entire body side made from the Super Formed process.

The Continental GT’s profile is longer and lower due in part to the positioning of the front wheels 135 mm further forward, which in turn allows the bonnet to be extended and the nose to be lowered. However, the key signature lines of the original Continental still dominate, with the ‘power line’ travelling from the headlights to the muscular rear haunch.

The rear of the car is a radical styling departure, with the taillights now shaped into ellipses, reflecting the silhouette of the exhaust tail pipes below them.

The lighting on the Continental GT uses the latest LED Matrix technology, but it is the design of the head lamps that truly sets them apart. Inspired by the finest cut-crystal glasses, the internal surfaces are transparent with sharply defined edges that catch the light like a diamond.

The result is similar to that of an illuminated gem – an effect which is magnified when the optional welcome sequence gradually illuminates the headlights as you approach the car. The taillights also feature the cut-crystal effect, highlighting the three-dimensional depth of the optics.

The new Continental GT has 21” wheels as standard, with two styles available, reflecting in turn the model’s elegant and sporting characters. A 22” lightweight, forged wheel is also offered, alongside a hand-finished option, which allows for a twisted polished finish.

In another example of Bentley’s exacting attention to detail, and the unique way in which Bentley design often serves a dual engineering purpose, the elliptical exhausts have a complex perforated sleeve which adds visual detail but also reduces the exhaust temperature.

The new Continental GT customer has a class-leading portfolio of 17 exterior paint colours to choose from – carefully selected to complement the character and lines of the car. In addition, a limited extended range of colours will be offered at launch, as well as the option of full bespoke colour-matching for Bentley customers.